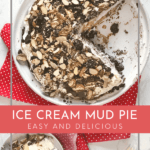 Homemade ice cream cakes are super easy to put assemble. This homemade ice cream mud pie is a twist on the classic, made with an Oreo crumb crust, chocolate and vanilla ice cream, homemade whipped cream and decadent fudge sauce. 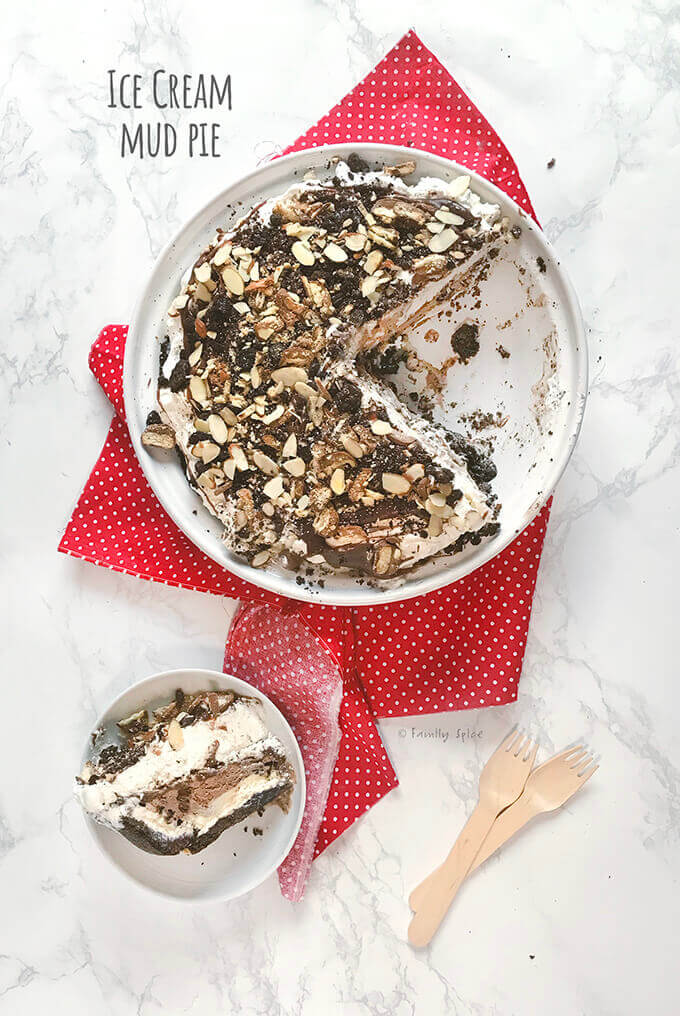 Kids are funny when it comes to their birthdays. I do not pride myself to be a professional cake decorator and as the boys are getting bigger, they want to move on from the cutesy cake pans. And every year, it seems like I have surpass whatever I made the previous year. 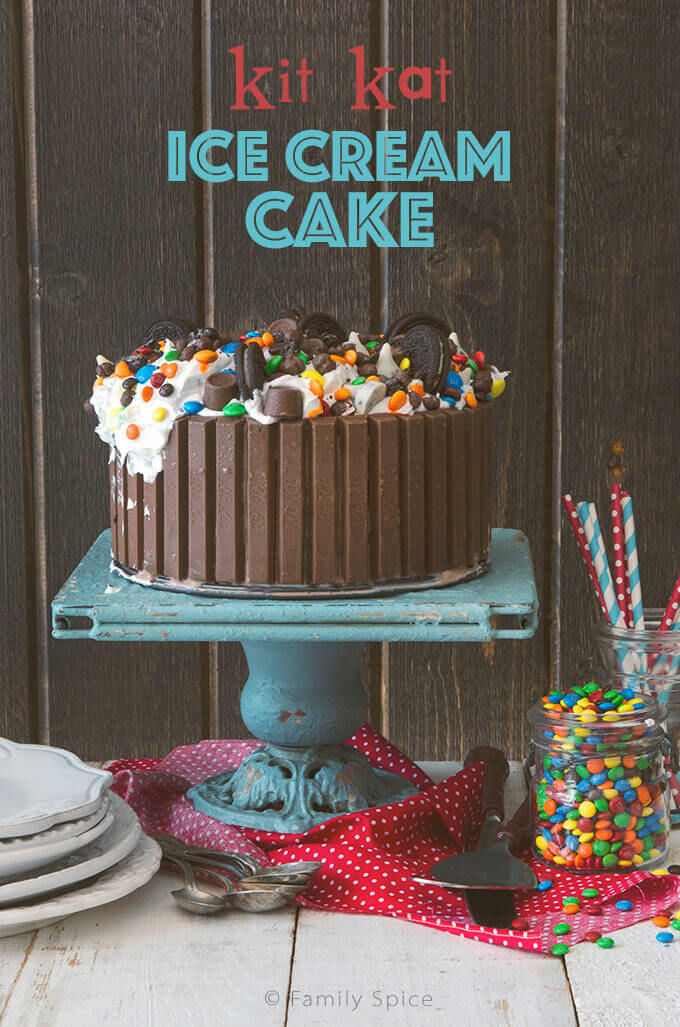 What is a mud pie?

It is true that I grew up in Texas, but I never heard of a mud pie until I saw a similar recipe in a magazine at the doctor’s office. I always thought that mud pies were well, “pies” and “cakes” you made in mud when you were a little kid.

Although a magazine recipe inspired my ice cream mud pie, it all originates from the Mississippi Mud Pie of old. It is similar to a trifle, which has layers of cake or cookie biscuits with custards and pudding. It is believed to have originated in the 1950s with the birth of ice cream novelties in the US.

And even though the great state of Mississippi has its name on this classic dessert, food historians dispute that the mud pie originated there. The pie traditionally consists of a chocolate pie crust with layers of chocolate pudding and whipped cream. The mud pie can be topped with chopped nuts, chocolate syrup and chocolate shavings. 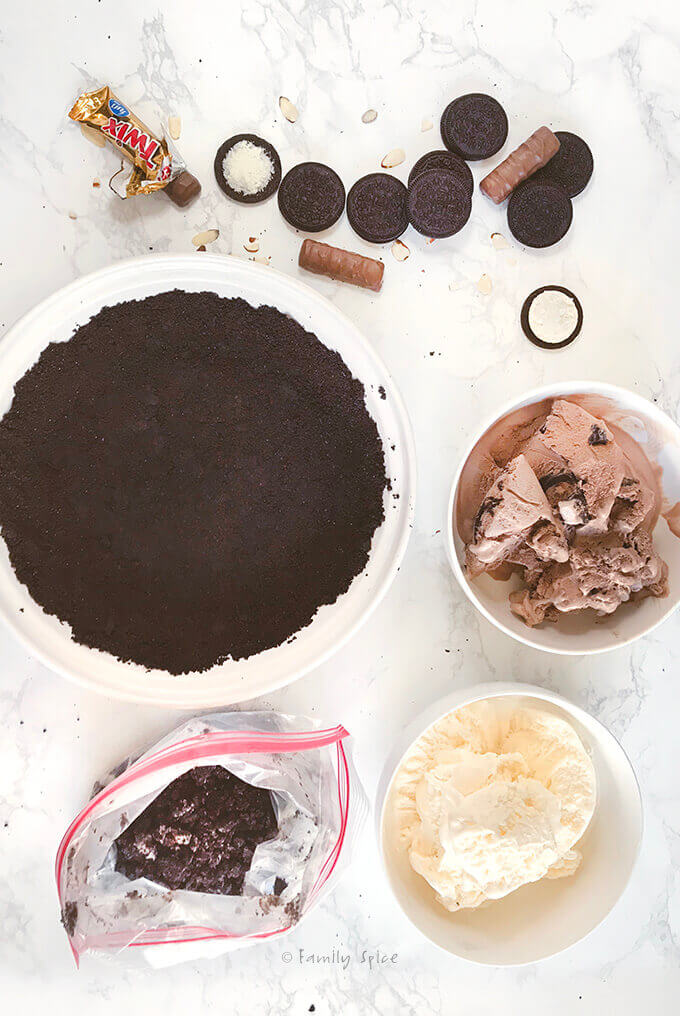 But this mud pie is made with ice cream and not pudding. And the chocolate crust is similar to the crust I use in my other ice cream cakes, starting with crushed Oreos. But, I can’t say this is a no-bake recipe.

After crushing Oreos (YUM!) in the food processor and mixing it with melted butter, you need to press it into a deep dish pie pan and bake it for 15 minutes at 350ºF. This makes sure you have a substantial crust that will hold your layers of ooey gooey deliciousness.

And even though this is a very simple recipe that any novice baker can make, it does take time. You have to bake the pie crust, let it cool, spread the ice cream layers, let it freeze, spread more layers and chill overnight.

So this is a great make-ahead recipe, when the day of your party you can spend your time making whatever else you must make. 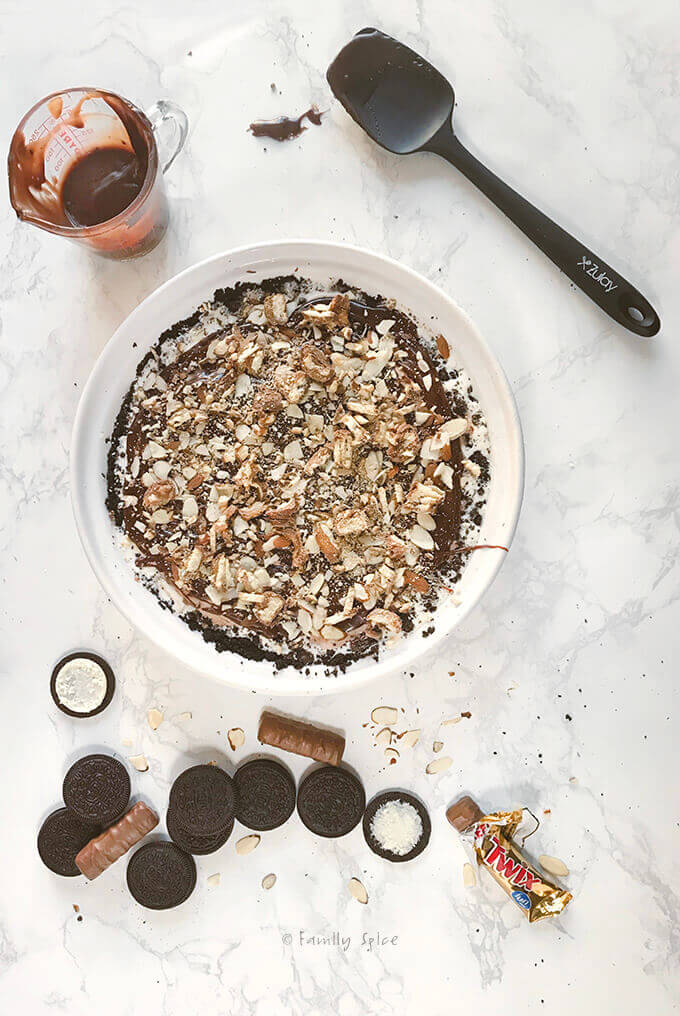 Layers inside a mud pie

As I stated before, the classic mud pie has layers of chocolate pudding. I chose to use layers of ice cream. For this recipe, I used vanilla and chocolate ice cream. You can also use dulce de leche and coffee, for alternative flavors. How about mint chocolate chip or cookies and cream? Anything goes!

Then you need to let it freeze for 2 hours, maybe munch on the remaining few Oreos you have left in the package while you wait. Once the ice cream has hardened a bit, spread some fudge sauce and top with toasted almond slices.

I added some chopped Twix candy bars for more deliciousness. You can also use Kit Kats or skip the chocolate candies altogether. Then cover the entire pie with plastic wrap and freeze overnight. 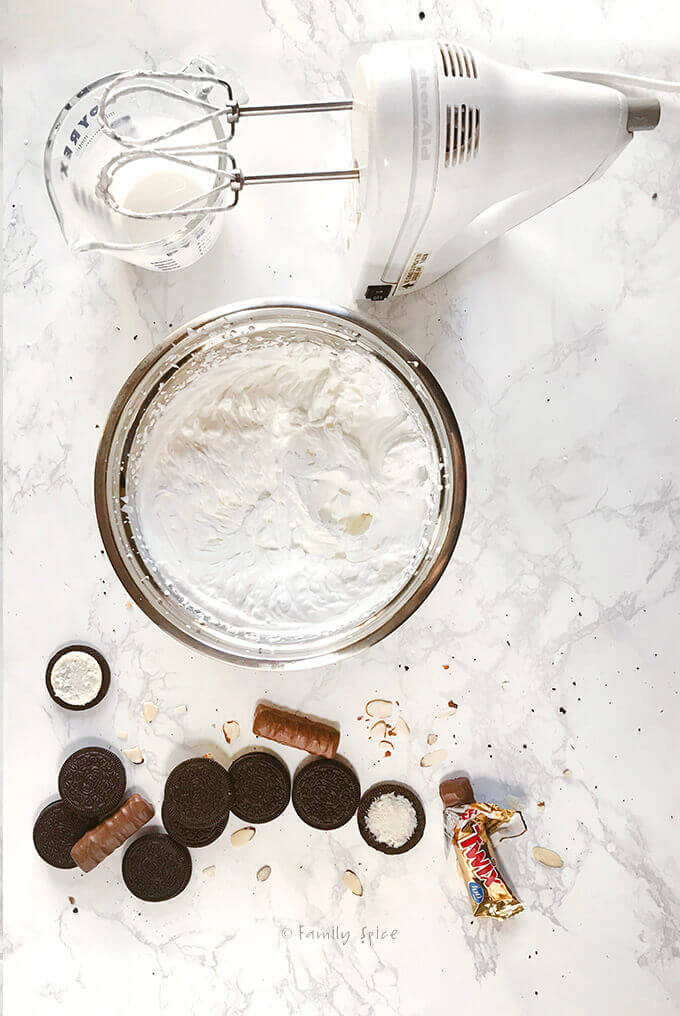 For some people, it is a travesty to use store bought whipped cream. Some argue that Cool Whip is nothing like real whipped cream. I won’t lie. Homemade whipped cream tastes pretty incredible so I have included that in the recipe for this ice cream mud pie.

But, if you don’t feel like making whipped cream, use Cool Whip! I won’t tell anyone!

Whenever you do add the whipped cream, be sure to garnish it with the remainder of fudge sauce, crushed Oreos, almond slices and candy crumbs you have left.

The same is true with the fudge sauce. You can go homemade or store bought. I have done both. Again, I won’t lie. Homemade fudge sauce is crazy good. My friend Jenni has an INCREDIBLE recipe for her old fashioned hot fudge sauce. I used it for these updated pictures and video.

Dangerous stuff, but it’s THE BEST! 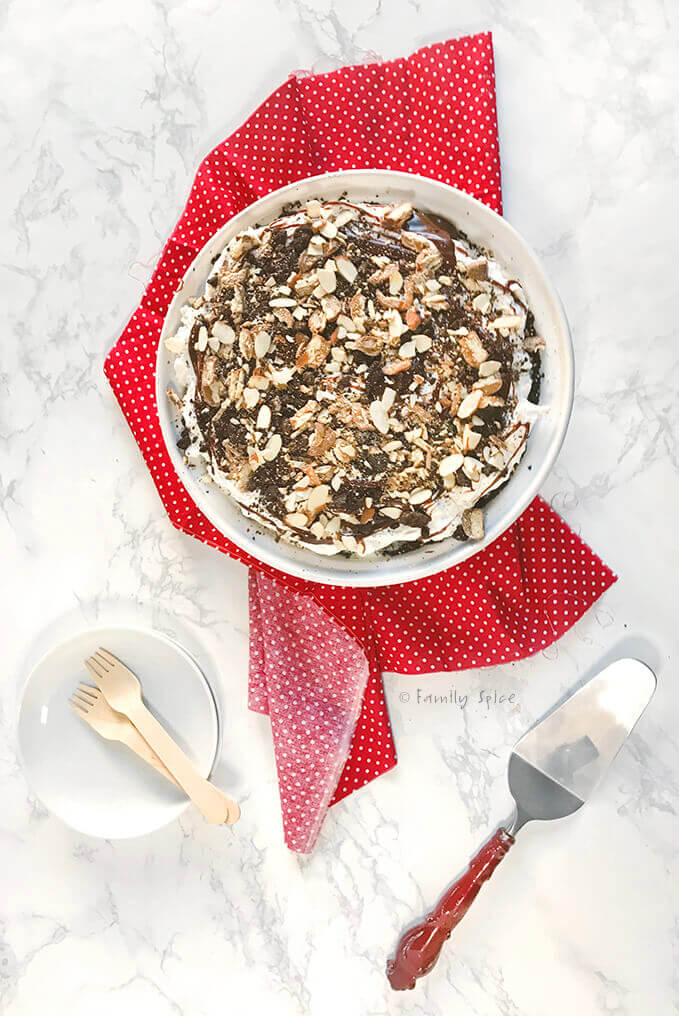 So, I confess. My dessert looks like a hot mess! But again, it’s a MUD PIE made with ICE CREAM. It’s supposed to be a bit on the messy side. And who cares?! It tastes incredible!

Everyone loved this dessert, from my 4-year old princess to her two sets of grandparents (ages, let’s say more than 4-years old!) and everyone in between. We even had a few slices leftover and I kept them in the freezer. They didn’t last more than a day or two afterwards!

For cleaner slices, freeze with the whipped cream and remove 10 minutes prior to serving.

You can also use dulce leche instead of vanilla ice cream or coffee instead of chocolate. 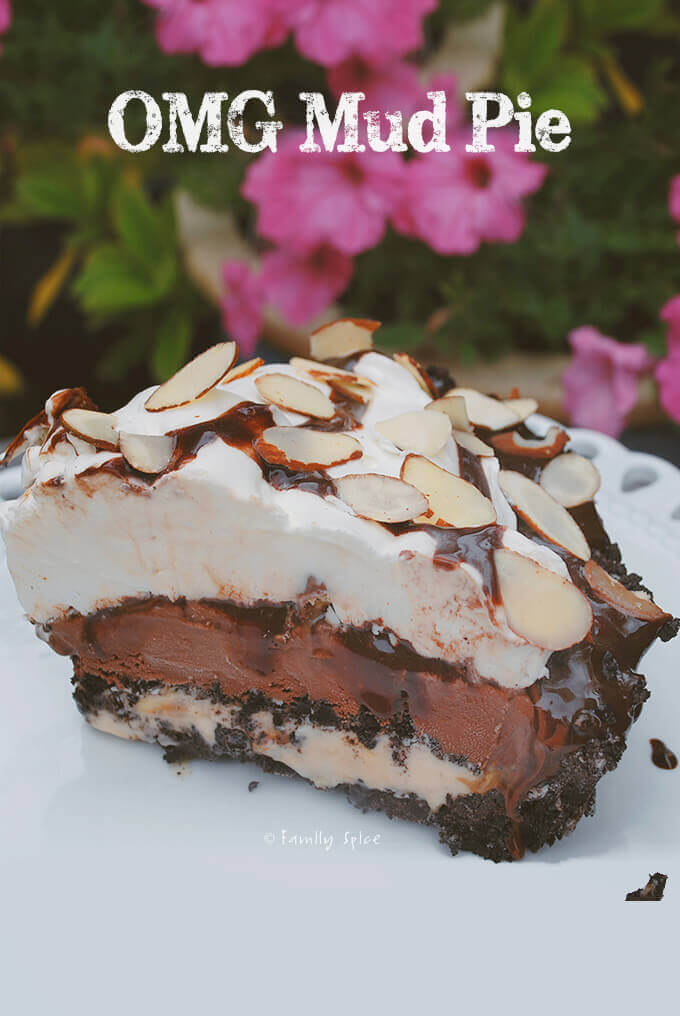 Mud pie? Count me in! This looks terrific — truly worthy of a birthday celebration.