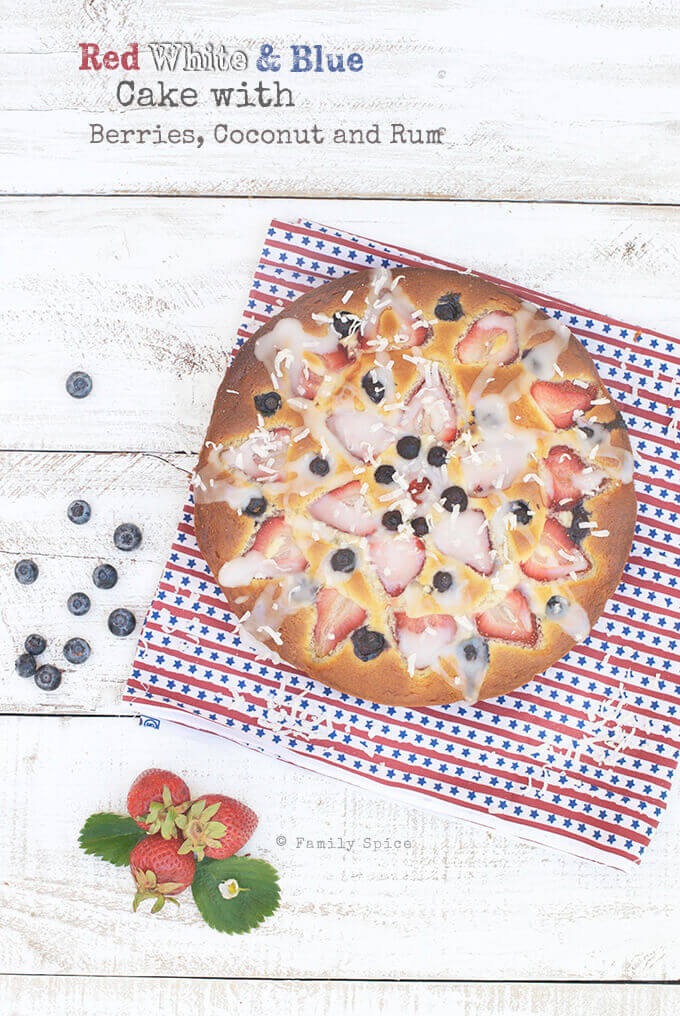 Like Memorial Day, the real meaning behind the 4th of July sometimes gets forgotten. Independence Day is a national holiday here in the U.S., and when it falls on a Friday or Monday, we make our plans for the long holiday weekend.

This year, it falls flat in the middle of the week, Wednesday. And I think it’s terrific. It’s a great way to stop what we are doing, THINK and honor our country, our freedom and our Declaration of Independence.

What better way to do this than to share this red, white and blue cake and some random facts about this historical document. 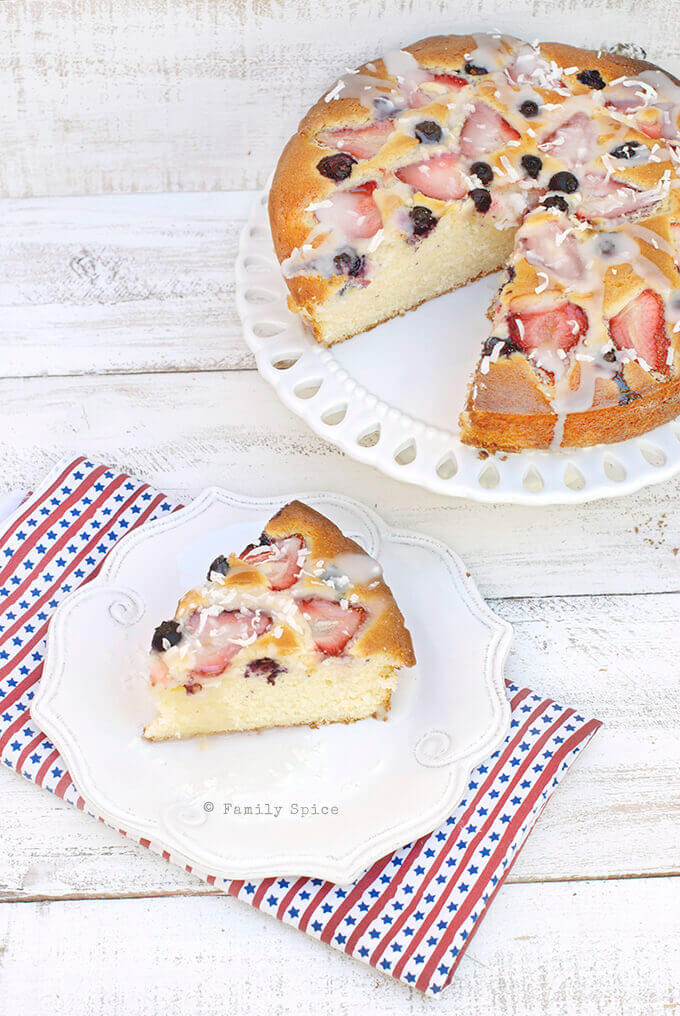 First, the cake. Of course!

This is a one pan cake that is studded with red (strawberries), white (coconut & icing) and plenty of blue (blueberries). To kick it up a notch, I made the icing with this household’s favorite, Malibu Coconut Rum.

Oh yeah, this is not your ordinary red, white and blue cake! 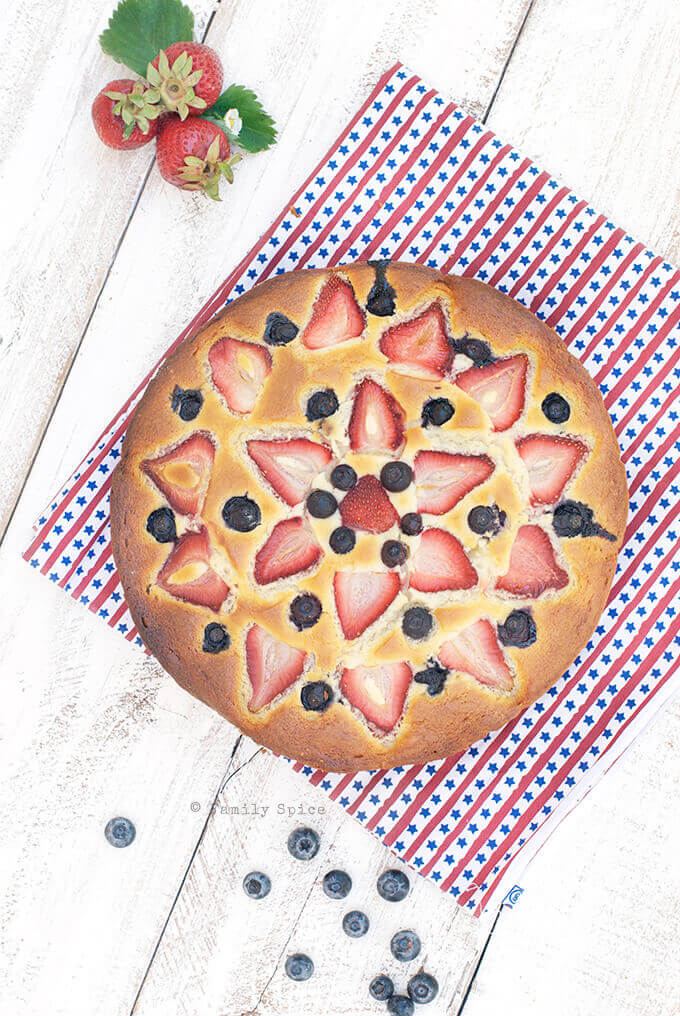 And now some random (and fun) facts about the Declaration of Independence I found: 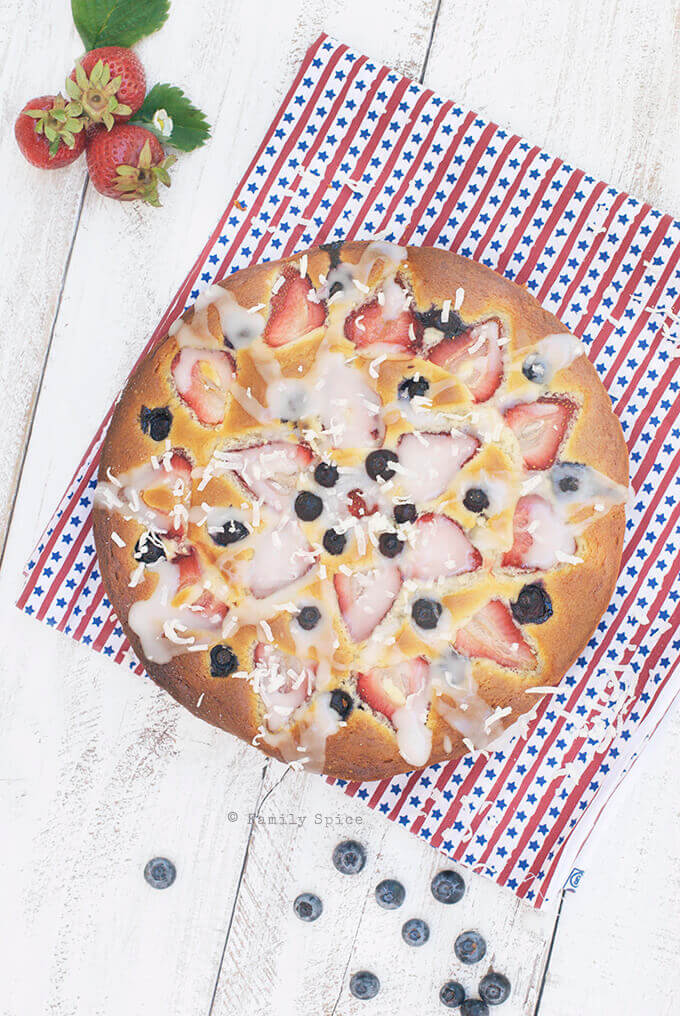 Or perhaps you would like some Red, White & Blue Ice Cream Cupcakes? Or even cool off with my Red, White and Blue Boozy Popsicles? Here’s a roundup of some other red, white and blue recipes I’ve developed.

Serving Suggestions: Serve with or without the rum.
Cooking Tips: Instead of soaking the cake with rum, prepare the icing with rum instead of water.

What a GORGEOUS cake Laura!!! I love how you decorated the cake top with berries…so pretty! Hope you had a nice 4th celebration. It was 52F when we were watching fireworks – totally wished I’m in So California!

Gorgeous cake! And thanks for all the fun independence day facts.

A beautiful cake and really like the use of the fresh summer berries and yogurt in this cake! I could see serving this for brunch, breakfast, entertaining and enjoying with tea. You have a lovely blog here, Laura! Refreshing to find other food-type bloggers in the S.D. area too! 🙂

Have a great & safe holiday week!

Hi, I’m Laura! I’m a cookbook author living in San Diego sharing 500+ recipes from all over the world, including Persian recipes. Whether I'm cooking over a campfire or in my kitchen, I make meals fresh, delicious and beautiful. More about me… 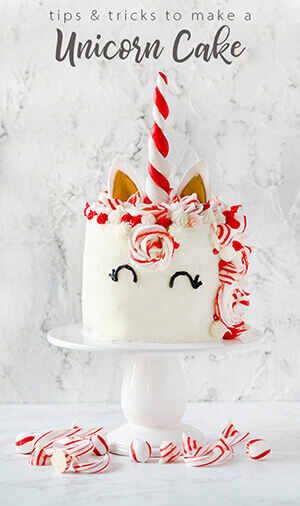