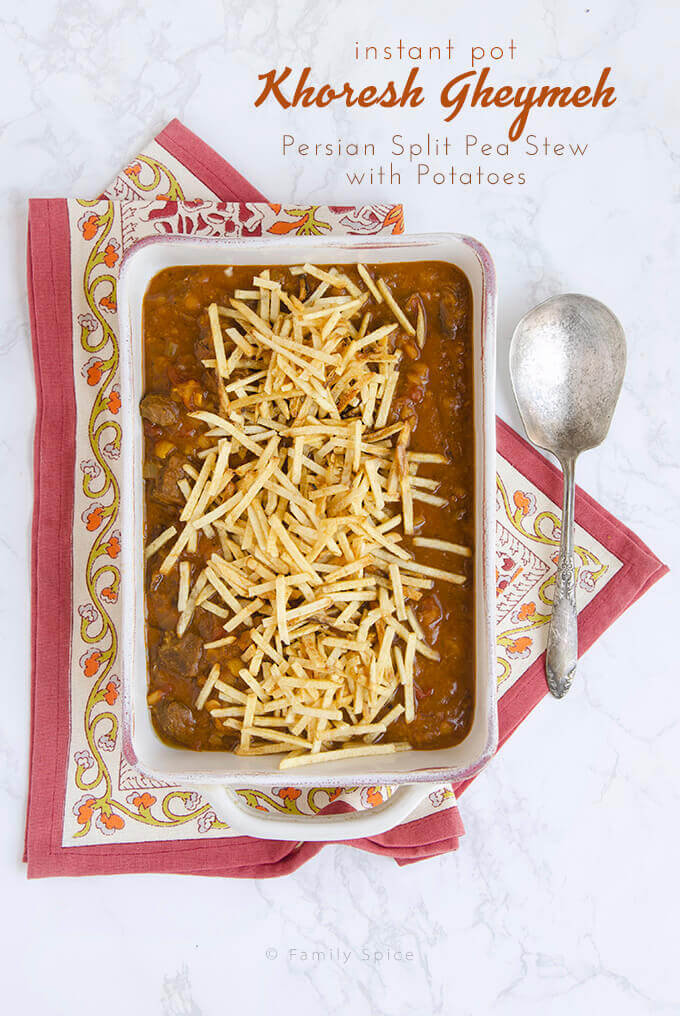 This recipe and video for Instant Pot Khoresh Gheymeh features the classic tomato based Persian split pea stew with its quintessential tart flavor from dried limes (limoo omami) and the fried potatoes garnished on top.

Persian cuisine is filled with many aromatic and incredibly delicious dishes. If you ever dine at a Persian restaurant and order the tahdig (Persian rice crust) topped with stews, you will be served the trifecta of stews, the three quintessential Persian stews: Khoresht Gormeh Sabzi (Persian herb stew), Fesenjoon (Persian pomegranate stew) and Khoresh Gheymeh (Persian split pea stew).

Traditionally, Khoresh Gheymeh is made over the stove, taking several hours for the stew meat to cook. But as I found house easy it is to cook gormeh sabzi in the instant pot, I decided to prepare this Persian split pea stew in the instant, as well. 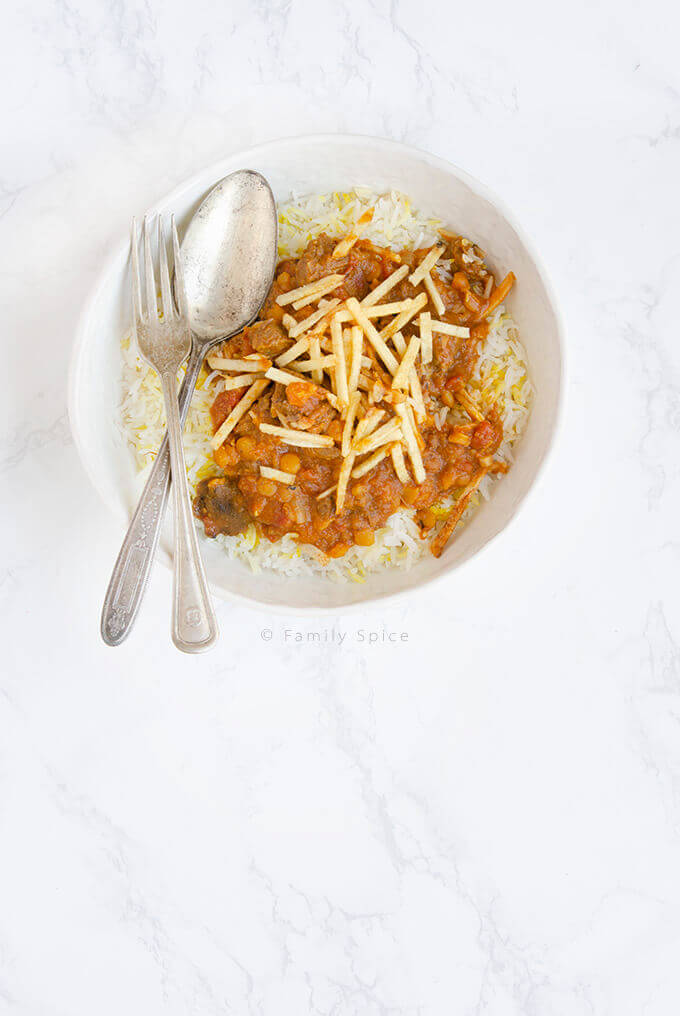 Gheimeh literally translates as ‘finely chopped’ and khoresh translates to ‘stew.’ In most Persian stews, the meat used is lamb shank or beef. The chunks of meat can be large or small. But for khoresh gheymeh, the stew meat is cut smaller, about 1-inch cubes or less. Some options for the meat is to cut up London broil, chuck roast, or eye of round.

The tomato based stew is more on the sour side because of the dried limes, and spiced with turmeric and a touch of cinnamon. Most Persian stews feature a vegetable, but this stew does not. Instead the stew includes yellow split peas and is topped with fried potatoes. 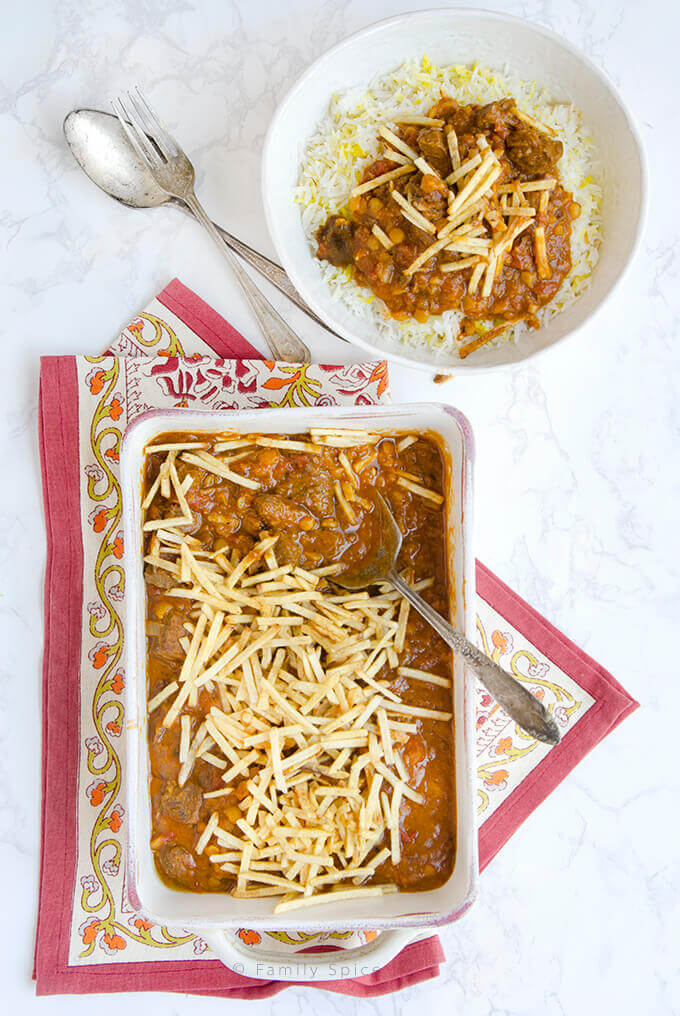 This post contains affiliate links. We are members of the Amazon Affiliate program. For any sale through our links, we earn a small commission. Your price is unaffected. For more information, please see our disclosure policy.

If you are new to middle eastern cooking, then an introduction to dried limes is a must. These little brownish-black balls might not look appetizing, but their flavor packs a powerful punch. Limoo Omani is a very common ingredient in Persian stews. Persians love the many profiles of sour, using sour grapes, sour plums and even lemon juice.

But these dried limes offer more depth of flavor, besides the puckering taste of lime juice. The entire dried lime is cooked in stews, where it softens and steeps it’s flavor into the dish. You can chop the dried limes first before adding them to the stew, or you can pierce the limes all over and keep them whole. As they cook and soften, you need to press them flat, to let the stew’s juices swim through lime.

Limoo Omani is also available crushed in powder form. The entire dried lime, seeds and all are pulverized. It is just another way to get the dried lime flavor when you just want a pinch. If you cannot find limoo omani whole or grounded, you can substitute with lemon juice. The flavor won’t be exactly the same, but it is a fair substitute in this dish. 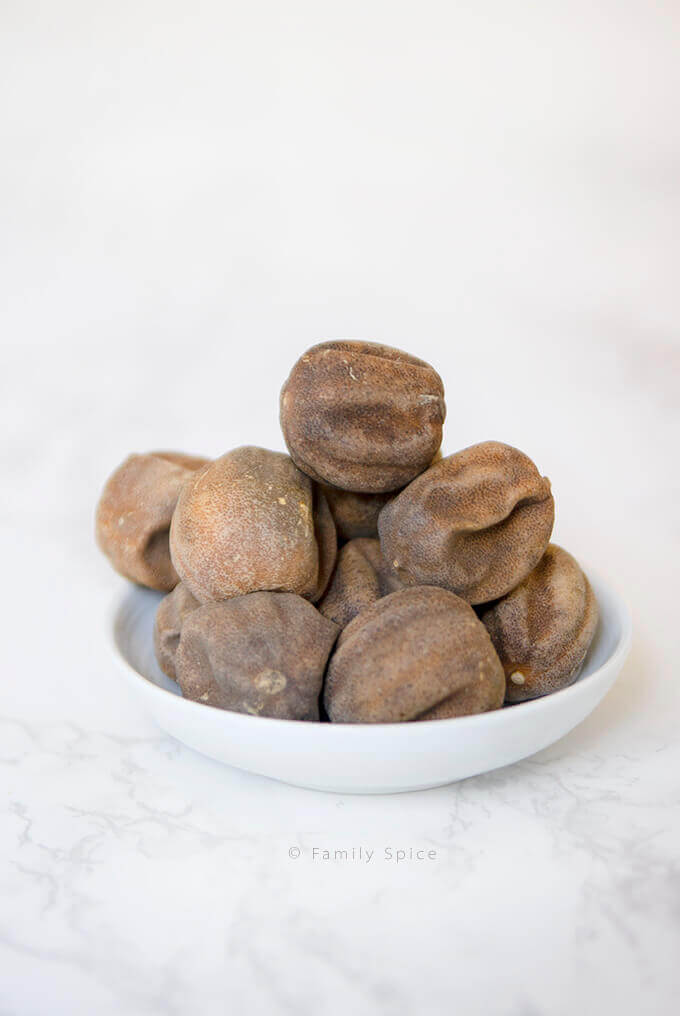 Unlike the green variety, these yellow split peas hold their shape when cooked. If they turn to mush, you cooked it for too long. They are high in protein and fiber, while low in carbohydrates, making them a great protein source for vegans and those following a low carb diet. 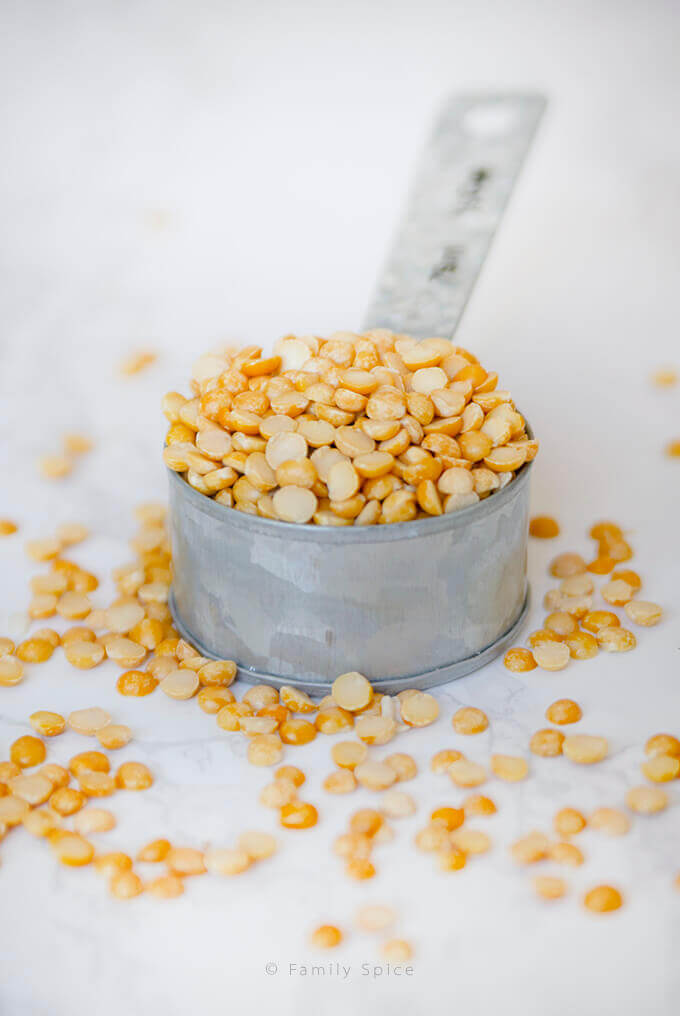 How to make khoresh gheymeh in the instant pot

Because this Persian split pea stew does not have any other vegetables in the recipe, it makes a great candidate to be created in the Instant Pot. And after creating Ash Reshteh in the instant pot, which is a Persian soup filled with beans, I knew the yellow split peas would cook beautifully, as well. The only trick is cooking the stew in two parts, so that the stew meat is tender and the split peas are not mushy.

The first part of the instant pot cooking process requires sautéing the onions and browning the stew meat. The instant pot does not get as hot as my pan over the stove, but it does an adequate job. Once browned, you add the beef broth, chopped tomatoes and tomato paste and cook it under pressure using the meat/stew setting for 20 minutes.

As my video shows you, the stew comes out perfect and ready to eat – all in about 1 hour instead of 3 or 4. Not bad, instant pot, not bad! 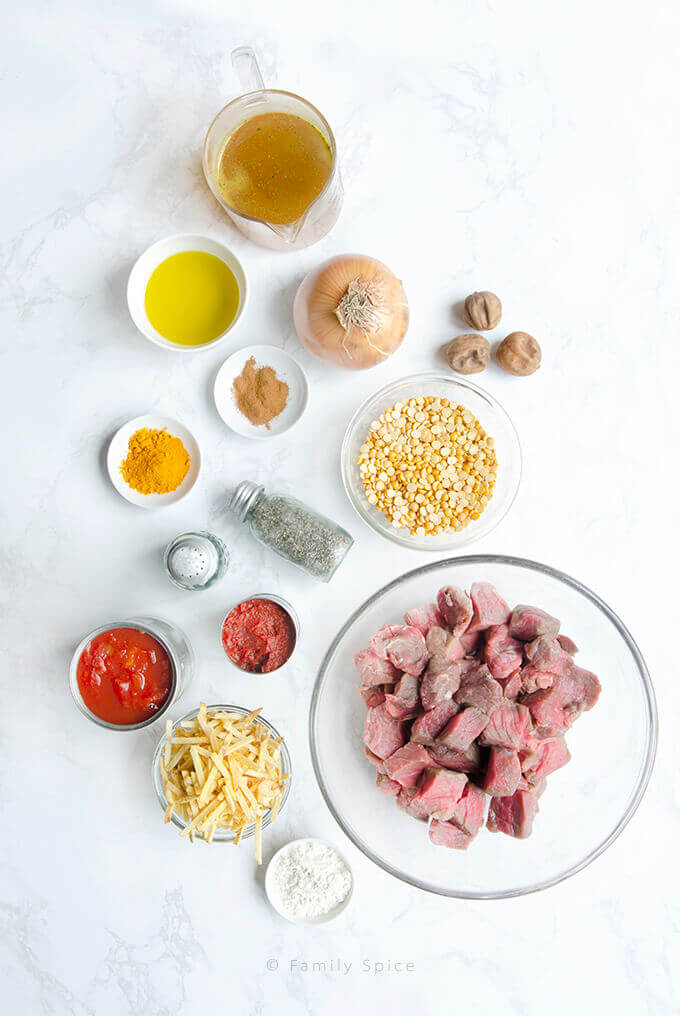 How to serve Khoresh Gheymeh

My favorite part of the khoresh gheymeh are the potatoes! Traditionally, the stew is topped with homemade fried potatoes. They can be cubed or cut like french fries. But because we are using the instant pot, I wanted to keep this dish as simple as possible without skimping on flavor or tradition.

So I topped this instant pot khoresh gheymeh with premade shoestring potatoes. They can be found in the snack aisle with the canned potato chips, or you can buy them here on Amazon. These babies are addicting and you’ll probably use more than the 1-2 cups I suggested in the recipe! They are crunchy and give great potato flavor to this hearty stew.

Of course, like other Persian stews, this yellow split pea stew is not served alone. It is served on a bed of fluffy basmati rice. I have yet to prepare basmati rice in the instant pot, but I know it is possible. So if you have an extra pot insert, feel free to prepare it that way!

The tomato base for khoresh gheymeh is the same base used for eggplant stew, khoresh bademjoon. Many people, including myself, prepare khoresh bademjoon with yellow split peas, as well. So feel free to fry up the eggplant and place it on top of the stew, instead of the potatoes. I’m a huge eggplant lover and love how the flavors mingle together in this stew. 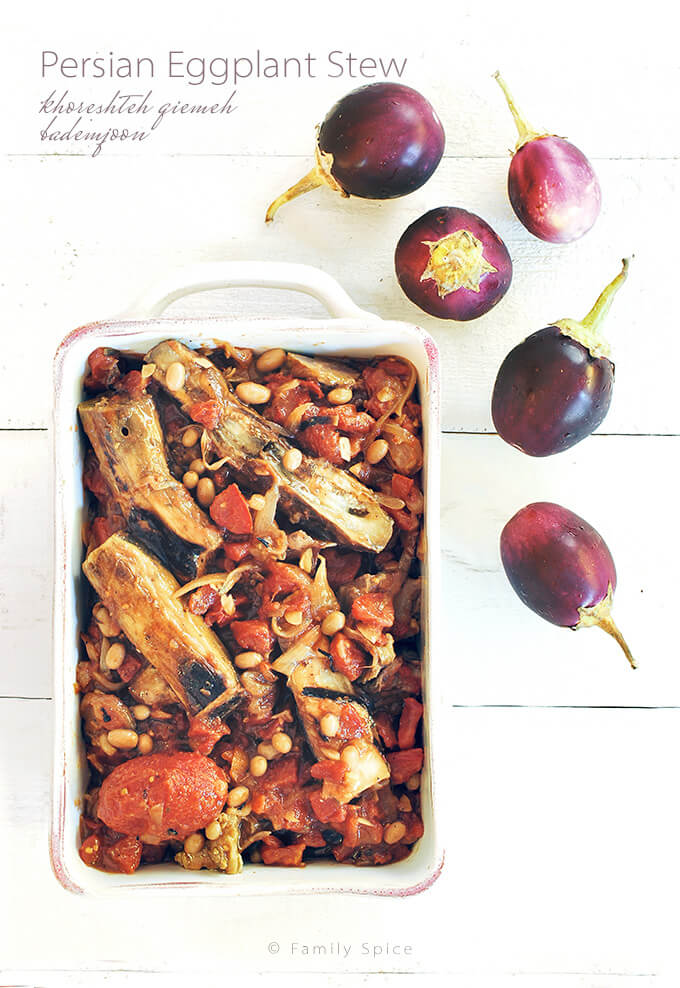 For gluten free option, use rice flour instead of regular flour or omit altogether.

You can also fry up or sauté chopped potatoes and use them instead of the prepackaged shoestring potatoes.

If you can't find dried Persian limes in whole or powdered form, you can use lemon juice instead.

What about saffron, that’s a staple ingredient for most Persian dishes yet I don’t see it here.

Most people do not add saffron to this stew. We do use it in many other recipes like our desserts and rice.

Thanks for the recipe! I just got an Instant pot and this is one of the first things I’ve made. Delicious! I might add one more mi hate for the second step and take one minute away for the meat next time—- the meat was perfect but my peas were a little firm. Could just be my family’s preference in texture! We add a splash of Rosewater at the end. I also didn’t have dried lemons but did a sprinkle of dried lemon powder and it turned out fine still. Thank you again!

I find with split peas there’s a fine line between firm and mush, ha ha ha! I’m so glad you liked the recipe. Never heard of the addition of rosewater, we’ll have to try it!
Thank you again for trying this and sharing your results!
Laura

This looks and sounds so great, Laura! Nice to know you can knock some time off of the process using an Instant Pot!

Terrific looking dish! I haven’t used those shoestring potatoes in years. Decades. Forgot they even existed — you brought back some memories. 🙂

I am so glad you created this recipe…it looks absolutely amazing!