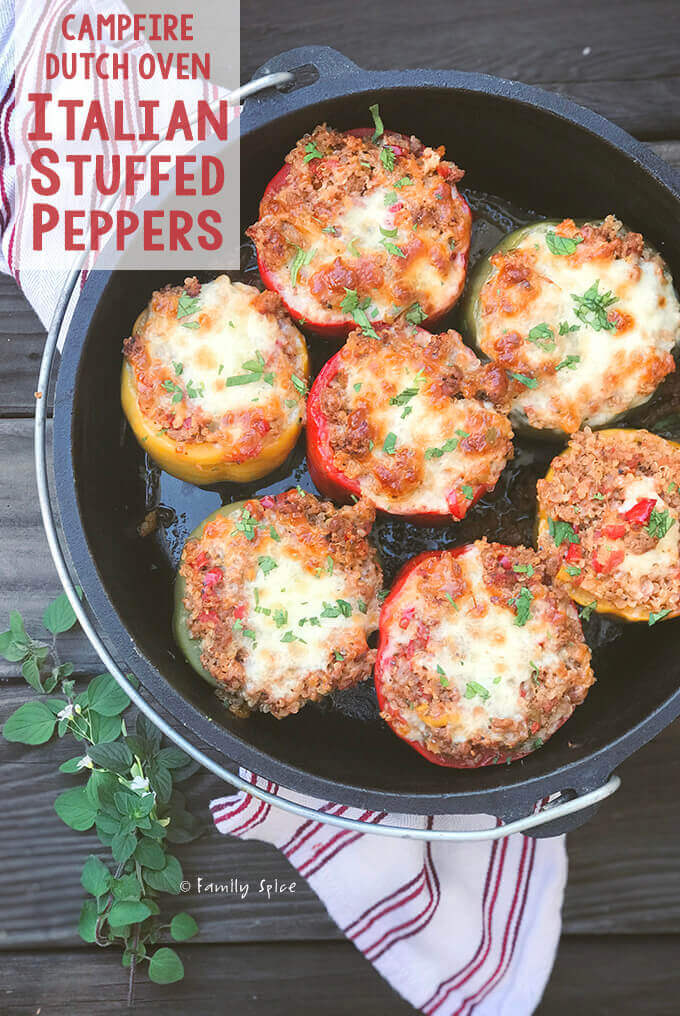 Whether you are camping or need a family friendly dinner, these campfire Dutch oven Italian Stuffed Peppers include ground beef, Italian sausage, quinoa and tomatoes and topped with cheesy goodness all served in a sweet bell pepper. Find my delicious cast iron campfire Dutch oven recipes.

This week is my kids’ last week of school. My first baby, The Professor, is graduating from high school. I’ve been aware of this fact for some time, but it really hasn’t hit me yet because we have been so busy this year with college applications, driver’s license tests and the usual hustle and bustle of the year winding down.

Despite my desire to forget that my baby boy is leaving in August to attend NAU in Flagstaff, the world keeps on turning and the seasons change. School is ending and summer vacation is here. And for many families, summer means camping. And you know I’m all about eating good food while camping!

My giant baby knows he is going to miss my home cooking, so I better make sure I feed him well before he leaves. We love cooking with our Dutch oven when camping because you can fit a big meal in one pot, which is perfect for this family of 5. The Dutch oven is super easy to cook and bake in, so if you are new to using them, check out my post here where I share my tips on how to cook in a Dutch oven.

What peppers should I use to make Italian stuffed peppers?

About a month ago, I had the pleasure of visiting Baloian Farms in Coachella Valley, California. It’s hard to believe that in the middle of the driest part of California, home of Palm Desert and the Salton Sea, is some of the lushest farms producing bell peppers, green beans, eggplants, grapes, figs, dates and even corn.

I learned so much on this visit and share the trip in the video here in this post. I was lucky enough to watch red and yellow bell peppers get harvested in the field. Did you know that all bell peppers start off green and then change color, either red, yellow or orange? The green bell peppers you know and love are just immature, young red or yellow bell peppers.

So, I decided to use green, yellow and red bell peppers to make these Dutch oven stuffed peppers. All of those colors do make a stunning presentation, am I right?!! 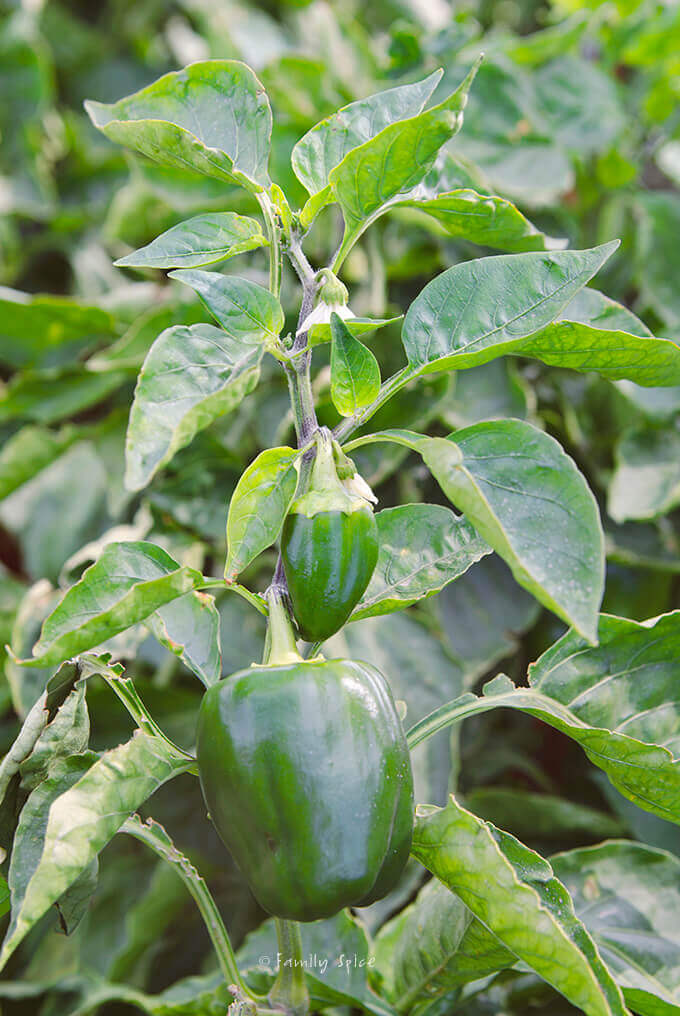 How to prepare stuffed peppers

Whether you are cooking these Italian stuffed peppers at home or while camping, they are very easy to throw together. If you are camping, you have two choices in preparing the stuffing. You can cook everything on site in the Dutch oven, requiring some cleaning before baking the peppers back in the pot.

Or you can cook the stuffing at home, place the meat mixture and cooked quinoa in containers and just mix everything in a bowl before stuffing. Either way you prepare the Italian stuffed peppers, the stuffing mixture does need to be cooked first.

I chose to use quinoa instead of rice because it has more fiber and protein. I also love the nuttiness flavor of quinoa. The other great plus of using quinoa, is that it cooks up very quickly, in 10-12 minutes.

Choose bell peppers that can stand upright. You don’t want them to tip over while they cook and spilling out your delicious Italian stuffing. Cut the tops off of your bell peppers and reserve them. You will chop them up (minus the stem) and sauté them for the stuffing.

Just be sure that your cut bell peppers do not surpass the rim of your Dutch oven, so place the trimmed peppers in the pot and make sure the lid will cover them before you stuff them. Yes I’m speaking from experience…. 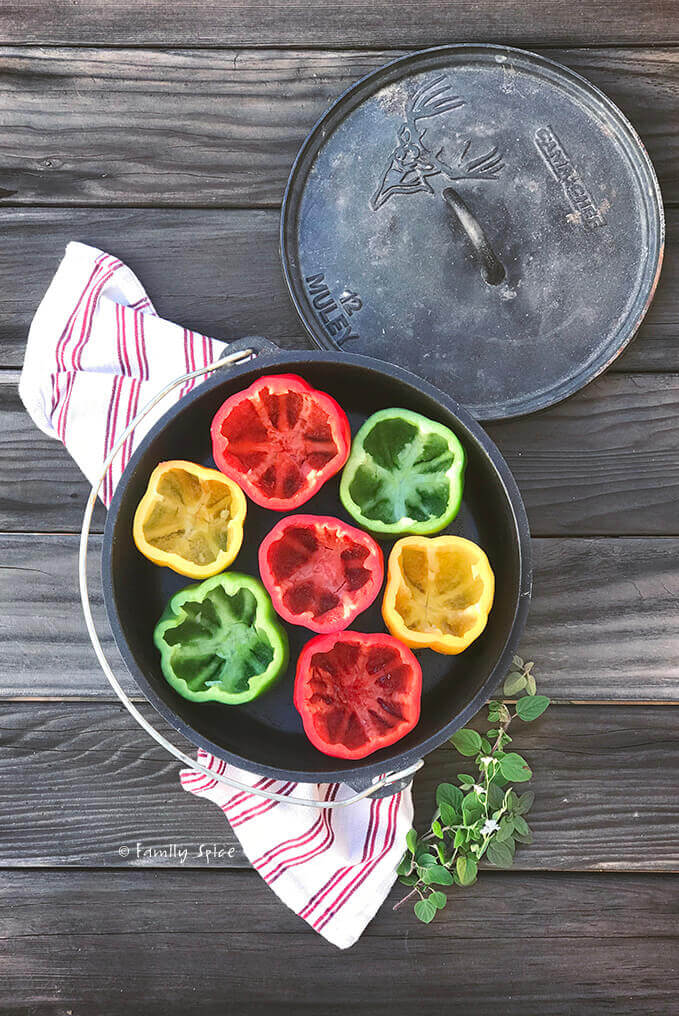 The meat mixture is prepared by sautéing onions, garlic and the diced tops of the bell peppers – nothing goes to waste! For the meat I chose to use a combination of ground beef and Italian sausage. You can use hot or sweet sausage mix, depending on your personal preference.

For seasoning, I chose basil and oregano and finished off the stuffing mixture with some diced tomatoes. To make this more kid friendly, I chose the canned petite diced tomatoes versus the larger chunkier version. You could use marinara sauce, but reduce the amount to 1 to 1 ½ cups, so the mixture doesn’t get super mushy.

Once the quinoa is cooked, mix it in with the meat mixture and you’re ready to stuff! This recipe makes plenty of stuffing for 7 large bell peppers. These babies will definitely fill you up and give you energy for the rest of your campout. Top with cheese and you are ready to cook. 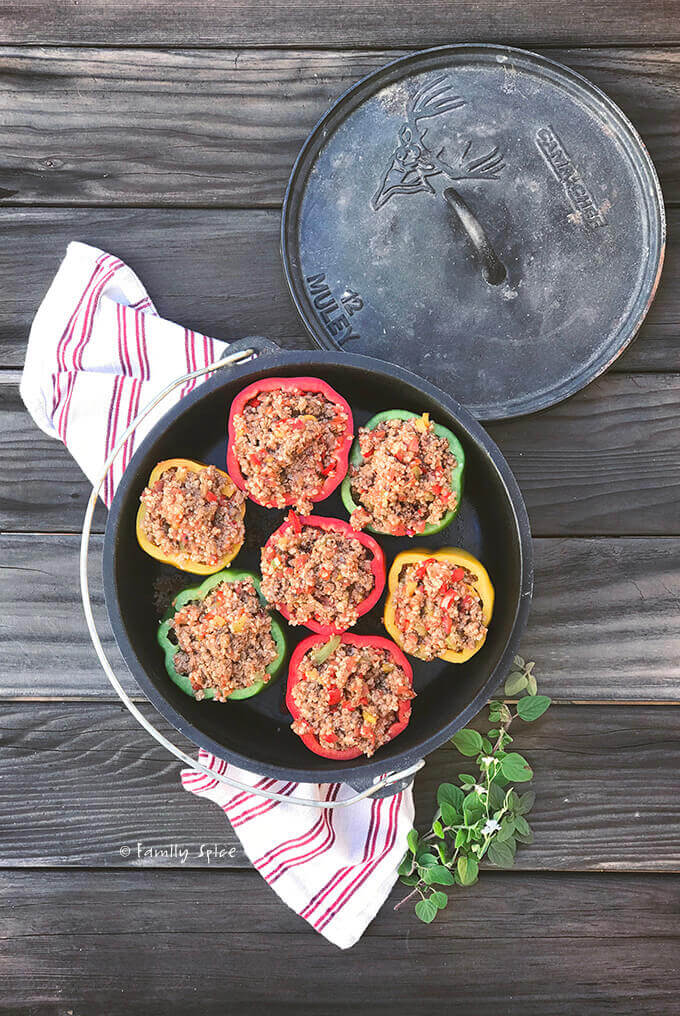 As I mentioned earlier, the Dutch oven is incredibly versatile and easy to cook and bake with. You can sauté in it like a cast iron skillet or bake in it like mini oven. I used a 12-inch cast iron Dutch oven in this recipe because my bell peppers were huge and wouldn’t fit in the 10-inch size.

The key to cooking in a cast iron Dutch oven is the coal count. For the 12-inch sized pot, use a chimney starter and light up 30 charcoal briquettes. When they all start to turn gray, about 8-10 minutes, they are ready to be placed on and below the Dutch oven.

If you do use smaller peppers, I give cooking instructions for the 10-inch pot in the recipe below. Using long handled tongs, place 18 hot coals evenly on the lid of the Dutch oven and 12 evenly underneath. Bake the stuffed peppers for 45 minutes or until the cheese tops are browned.

The stuffed peppers are just as easy to cook at home. Just place the stuffed peppers in a casserole dish that is large enough to hold all of the peppers and bake it in the oven for 400ºF/204ºC for 45-60 minutes, or until the cheese tops are browned and bubbling. 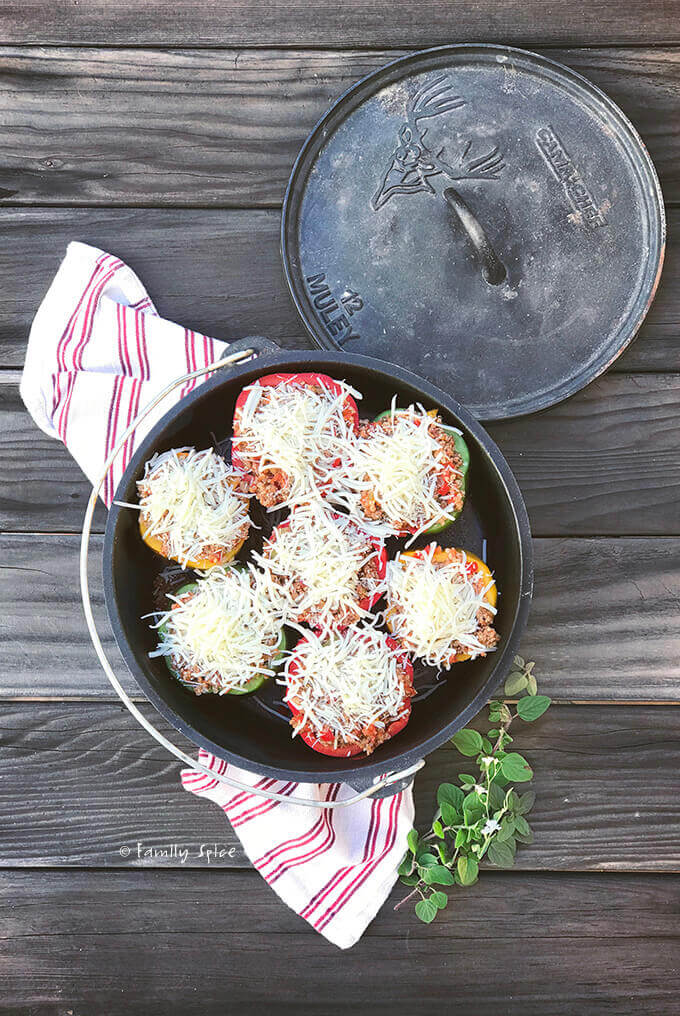 Can you freeze Italian stuffed peppers?

As I mentioned before, there are some ways to make the cooking process go more quickly when you are making these Italian stuffed peppers in the Dutch oven while camping. You can make the stuffing mixture, transfer it in a resealable bag, and store it in the refrigerator/cooler and assemble the peppers the next day to cook at your campsite.

If you are looking to make these stuffed peppers at home, you can also assemble the peppers all the way through the recipe til they are topped with cheese. Then place the assembled peppers in an airtight container and freeze.  Just thaw completely prior to baking.

And of course, you can also freeze any leftover cooked peppers for up to 6 months. They should keep in the refrigerator for 3-4 days. 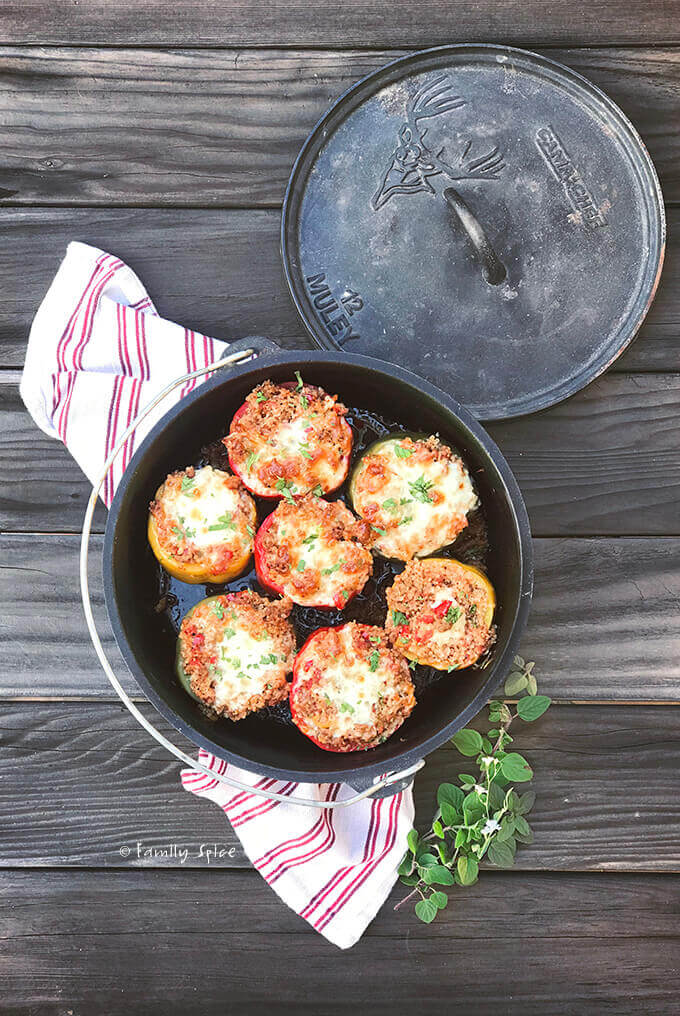 And if you didn’t know, I have a new cookbook out that is perfect for whenever you cook outdoors, whether you’re camping, at the beach, park or lake house: The Camp & Cabin Cookbook (Countryman Press 2018). I have 100 recipes that are all prepared outdoors and over fire using multiple techniques, including the beloved Dutch oven. Learn more about my camp cookbook!

To bake at home, place stuffed peppers in a large casserole dish and bake at 400ºF/204ºC for 45-60 minutes, or until cheese is golden.

1 stuffed pepper
Amount Per Serving: Calories: 551Total Fat: 33gSaturated Fat: 11gTrans Fat: 0gUnsaturated Fat: 22gCholesterol: 95mgSodium: 851mgCarbohydrates: 30gFiber: 6gSugar: 9gProtein: 35g
Disclosure: This post does include affiliate links. I was paid to visit Baloian Farms and share what I learned with you all. The story I have written is all true, and the opinions are truly mine. If I didn’t like it, I wouldn’t blog about it!
5 1 vote
Article Rating
« How to Grill a Porterhouse Steak with Cowboy Steak Rub
The Persian Kabab Burger »
Subscribe

I love that this stuffed pepper recipe is gluten free!! I can’t wait to try it!

Hard to believe The Professor is just about to start college! The years do fly by, don’t they? Anyway, this is a wonderful dish — fun to make, and more importantly really tasty. Thanks!

I fit under his chin now! But he’s still my baby giant!