The traditional whiskey smash gets a makeover in this Berry Bourbon Smash: strawberries, blackberries and blueberries make this cocktail fun and fresh. 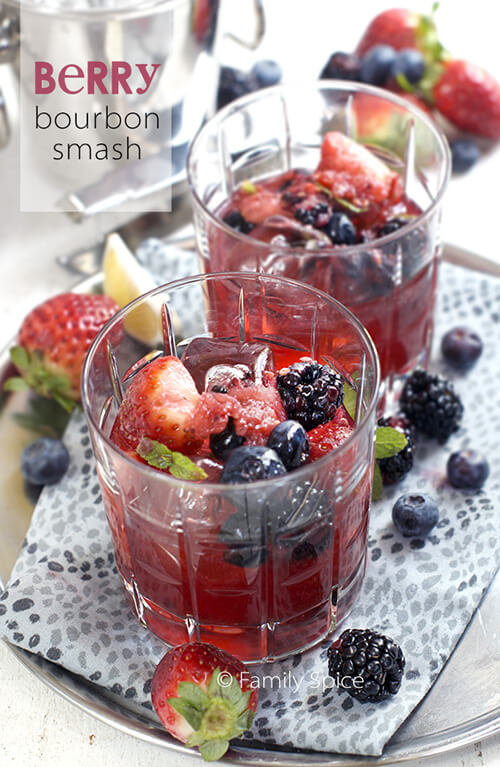 I do not tout myself to being a mixologist. Far from it. A good friend of ours did take a mixology class and she has taught us a lot of nifty tricks over the years. My Engineer Hubby has taken it upon himself to learn the art of making a fab cocktail. We have experimented with infusions and shrubs, and we have now moved on to enjoying bitters, especially after buying my hubby this fabulous bitters book by Brad Thomas Parsons for Christmas.

Last year another good friend of ours has a small whiskey distillery. So hubby started studying about whiskey. And if you know my husband, he takes his learning seriously.

Me? I can not take a swig of whiskey straight up. I always considered whiskey and bourbon to men’s drinks. So I was excited to come up with a cocktail I could enjoy when I was sent samples of Four Roses Bourbon. Maybe I will finally move past from the “girly drinks” the hubby usually makes for me.

The first thing I did was to figure out what bourbon was.

all bourbon is whiskey, but not all whiskey is bourbon

It’s definitely more complicated than that statement! Whiskey is made all over the world and is made from fermented grain mash and then aged in wooden barrels. The different varieties of whiskey come from the different grain varieties used.

Bourbon is basically whiskey, but must be produced in the U.S. and made from 51% corn. There are even more requirements for bourbon to be called “bourbon.” You can read all about them here.

Great! I now know what bourbon is, what should I do with it? 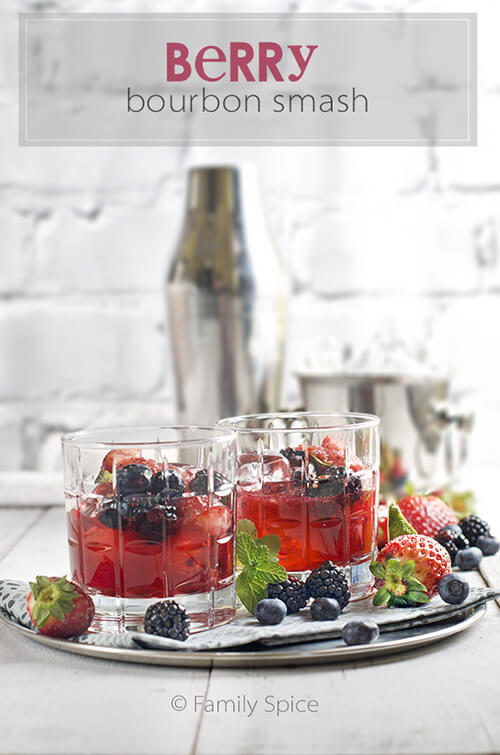 A bit of research and I found the perfect girly whiskey drink: a whiskey smash. Apparently, it’s one of the older cocktails in American history, first being published in 1887. In it’s simplest form, it is a cross between a whiskey sour and a mint julep. Many varieties are out there, including whiskey smash made with fruit.

So I made a Berry Bourbon Smash using fresh berries, lime, mint and simple syrup. Hubby thought it needed something else.

Voilà! A splash of aromatic bitters and it was done. 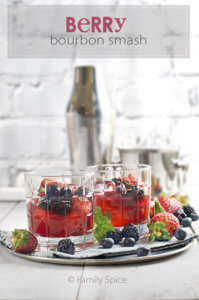 The traditional whiskey smash gets a makeover with fresh strawberries, blackberries and blueberries. Recipe by Laura Bashar of Family Spice

Disclosure: I received samples of Four Roses Bourbon to develop a recipe. The story I have written is all true, and the opinions are truly mine. If I didn’t like it, I wouldn’t blog about it.